I create a folder bin and create inside of this folder an executable file called in this case as the gem, ‘artify’.

When I type: $ruby bin/artify,  everything run but I don’t want this. I want that the user from the bash can type: $ ./bin/artify.

Ad I can see that artify doesn’t have executable permissions. To change this I type:

This executable file is not a ruby file so I have to include at the top the following:

Then I require our environment file to use all the gems already installed. 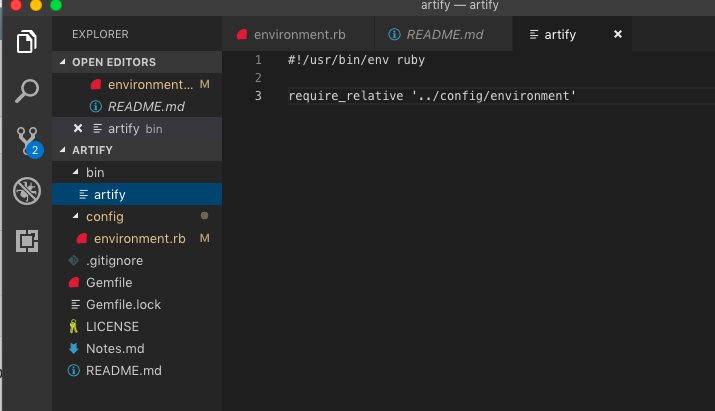 In this file I want to run for my still imaginary CLI class. I want to write here something like: CLI.new.run.

So, at this point, I know I want a class CLI, where I am going to build all the methods and keep all data to run my CLI.

I finally changed this name for ‘artify’ in case I want to publish it in RubyGems.org.

I would like to build a command line interface gem where I can check art exhibitions and get more info about the ones I liked.

How it would work:

-Which exhibition do you want to learn more about?

-And it will display more info about the exhibition selected.

Setting my own environment: Visual Studio Code, Git and Bundler

First, I create a repository in Github.

Then, I create a new folder in my laptop where I want to clone the repository.

I open this folder in my VS code and open the terminal (ctrl + `).

I run: git clone + the https from the repository.

When I make changes:

First, I stage this changes.

Third, I push my changes.

First I make sure I have the latest version of RubyGems. I run in the VS code terminal $gem update –system

Then I instal Bundler: gem install bundler but I got an error message

I don’t have write permissions. I googled this error output and I am trying something  I found in stack overflow: sudo gem install bundler. I gave the personal password for my computer and it worked!

The purpose of sudo is to execute the command given to it with root privileges.

I created a new file gemfile and I am adding my gems to it, bundler.

The second specification '>= 2.0.1'means any version greater than or equal to 2.0.1. Both specifications have to be true, so this gem couldn’t use version 2.0because it’s lower than 2.0.1.

I run in the VS code terminal $bundle install

Automatically a file was created in my directory: Gemfile.lock

I run in the VS code terminal $gem list 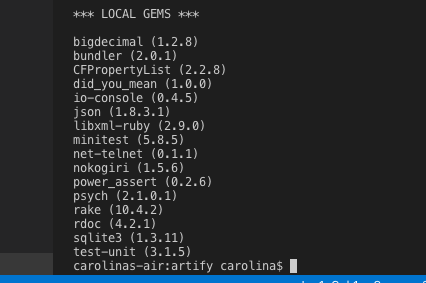 Checking where my Bundler is

I run in the VS code terminal $bundle show [bundler]

Adding Gemfile and Gemfile.lock to my repository

I run in the VS code terminal $git add Gemfile Gemfile.lock.

I could staged the changes in my VS code, they do the same thing that the git add command.

I check my Github repository….and it didn’t work.

Ok! I forgot to push my changes, so I ran: $git push origin master

Done! I got my two new files in my repository.

Now, I want to install Nokogiri

I run in the VS code terminal $sudo gem install nokogiri

I check if my changes are in Github and…no! They are not! Why? BecauseI forgot to push them.

My work flow in VSC:

I run in the VS code terminal $sudo gem install pry

And then I add the new gem to the Gemfile

And I don’t forget about my VSC workflow! Save, stage, commit and push.

I was trying to install it and got this error:

I googled it and…

OpenUri is part of Ruby standard library, I just need to require it. 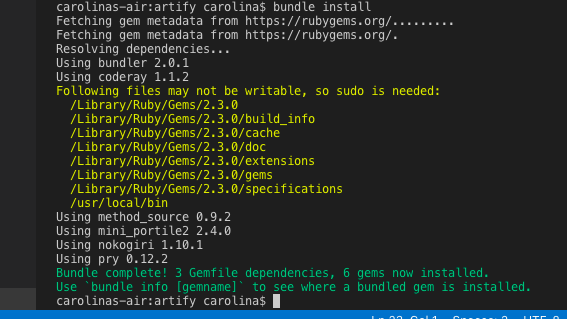 I run in the VS code terminal $sudo gem install colorize

I add my new gem to the Gemfile.

And run $bundle install to update my Gemfile.lock. 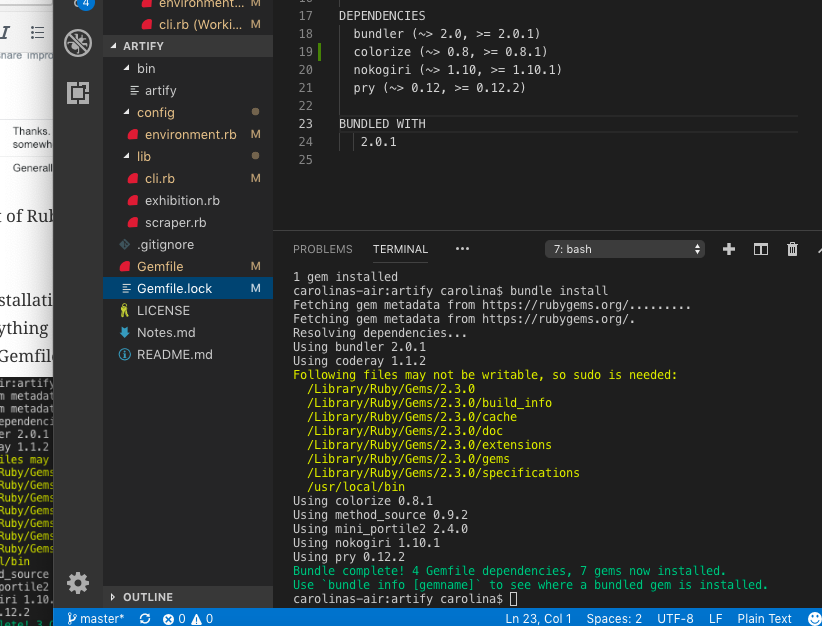 I open my Gemfile and do this with my pry gem:

This is Group Syntax and I am specifying the environment where it is going to be used pry. I am going to change it for a shorter syntax, the hash syntax: gem ‘pry’, :group => :development

After installing all my gems I need to require them where I am going to use them.

Now, I create a folder config and a file environment.rb inside. In this file I will be loading, requiring, all of my app’s dependencies like my gems.

With this code all the gems that are inside Gemfile are required.

I need to require ‘open-uri’ and ‘colorize’ too in my environment.

From what I’ve understood Object-Oriented programming is very popular and it has lots of advantages. The programmer may have a closer feeling of working with real-life entities due to the multitask nature of the objects in OOP. From my point of view OOP is a good way to keep all your code organise. Each object contains its data and functionality within its scope and if its methods are written in an abstract way they can be reused for other objects or for a different project.

I am still working in the OO Ruby section and it is taking me some time to understand all the concepts and why or when to use them. Here it is what I have learned so far:

Class names begin with capital letters because they are stored in Ruby constants. If our class name contains two words, the name should be CamelCased.

Every time we want to represent a new individual in our program we should instantiate an object of that type (Dog.new). We call these individuals instances.

We call the methods defined within the object’s class instance methods because they are methods that belong to any instance of the class.

They provide a mechanism for an object to expose to the outside world its data. They can manipulate the internal state of an object and provide some functionality for an individual object too.

Our object’s instances can have attributes, like a name or hair colour in the case of our Dog class. In order to set these attributes we have to use a writer and in order to have these data available in the outside world we have to have a reader. It is very important to use an instance variable (@name), otherwise the getter method couldn’t read the data that we set in the writer method because it is out of scope.

This is the explicit method for the attribute @name. There is another faster way to do it using a macro: the attr_writer, the attr_reader and the attr_accessor that does the work of the two previous macros. In Ruby a macro is like a method that instead of returning a Ruby datatype returns more Ruby code. The implementation of macros is considered metaprogramming.

When to use attr_accessor vs a custom reader/writer.

The attr_accessor macro will provide a naive interface for reading and writing to an instance variable. Anytime we need something conceptually different or more complex, we should build our own reader or writer.

Whenever an object needs to refer to itself, the keyword “self” is used.

Class variables are for properties that belong to the entire class. A class level variable can be used for example for instance memoization, for keeping track of all instances of a class or for collaborating data. The name of the class variable is written with a double @ at the beginning of the word: @@class_variable_name.

#self.all is a class method for reading data stored in the class variable @@all. This is a class reader, very similar to an instance reader method that reads an instance property.

With these methods we can access any class variable. A class method operate on the entire class and expose the class’ scope to the rest of our program. They don’t have access to the instance scope.

The most common class methods are:

A class constructor is any class method that instantiates an instance of the class.

A class operator is perfect to manipulate any class level data.

Usually a programming language falls under one paradigm like  Ruby , that is mainly an OOP language. But some other languages as JavaScript can be multi-paradigm and support procedural, object-oriented (prototype-based) and functional programming styles.

The main difference between them is how you organise your code:

-In a procedural approach your code is a list of instructions or steps to be carried out.

Procedural snippet of a Tic_Tac_Toe
Ruby

-In an Object-Oriented approach your code is organised using objects and classes.

OOP snippet from a Tic_Tac_Toe

Reading about the different paradigms I found lots of new and very complicated concepts as: modularisation as a main trait of the procedural paradigm, and data abstraction, encapsulation, polymorphism, inheritance and serialisation-marshalling as traits for the Object-Oriented paradigm.

Apart from the desire to look the other way, I decided create some short and easy to understand definitions. Maybe the next time I find these concepts I don’t feel so uncomfortable!