React is a front end web framework built entirely out of JS. We use JSX, an extension of vanilla JS, to write our components.

Using components allow us to separate functionality and code.

It has a virtual DOM, to render faster.

React includes Babel that compiles JSX down to React.createElement() calls and Webpack, the module that bundles the JS files of the project.

Conceptually, components are like JavaScript functions. They accept arbitrary inputs (called “props”) and return React elements describing what should appear on the screen. –reactjs.org

*React elements are the objects created by React.createElement()

Functional components don’t have state but have props, we have to explicitly pass them as the argument for the function.

We can use object destructuring and extract values from props.

The components are the files written using JSX. You can import one file/component into another component and make it its parent component so its parent can render it inside an element.

*must never modify its own props. For that, use the state.

All React components must act like pure functions with respect to their props. –reactjs

So we have talked so far about functional, class and pure components. Container and presentational components are not different types of components, they are a way to organise your react app.

In this example I render the App component.

Importing from the node_modules folder and the src folder, exporting and the Component Chain

When a component doesn’t have an export means that is the top of this chain.

*For an optimization of udpating, React recommends using React.PureComponent instead of React.Component. PureComponent doesn’t have access to shouldComponentUpdate because he will check for changes in props and state and update if necessary.

Props are arguments passed into React components. They are like function arguments in JS and attributes in HTML. To send the props into a component, we use the same syntax as HTML attributes. React props are read-only. A component can change its own state but not its props. The parent who is passing the props can change them.

The state object is initialised in the constructor method.

We can change the state using setState(), which will re-render the component:

When we want to update our state based in the previous state. Never use a this.state inside a setState. We can pass a function to setState that, when called inside setState will be passed the component state from when that setState was called (previous state) and the return value will be the new state (important use return!).

React uses basic HTML events and wrap them in the SyntheticEvent to make sure events are handled the same way across all browsers.

We can not modify props only the state. Every component can modify its own state using setState, but what if a child want to modify the state of its parent? In order to do this we can use a callback. The parent component can pass down a callback function to its child where its state is modified. The child will have access to the cb inside the props being passed to it.

When the event fires, the event data is sent to the callback. If we need to use this data in an asynchronous way we can store it in a variable or we can make the event persistent (event.persist()).

When you have a form in React you usually want to write a JS function to handle the submission and have access to the form data. There are two different ways to control the form’s data, the controlled and the uncontrolled form,  but the safest is using a controlled form.

Controlled forms store their input values in the state. With a controlled component we can control user input and show errors. How do we add the input data to our state?

Having the form data in our state means that it is easy to pass them down as props to other component or pass them to a parent component using a function callback supplied in props.

We can access the event.target attributes of our handleChange function and get different info. For example if we give to our input an attribute name we can access it via event.target.nameand that means that we can create a more abstract handleChange function and use it without having to write a different function to handle the changes for each input of our form, in case we have a form with more than one input like the one in the example. In order to do so we have to make sure that the name value is equal to the key/keys of our state.

We should include a key (string) in our list of elements.

A good rule of thumb is that elements inside the map() call need keys. reactjs.org

The render() method is necessary for a class component to be valid, the other ones are optional.

React has special built-in events relating to the component lifecycle, the lifecycle hooks/methods.

Another way to organise the fetched data is using the container component pattern. Here it is a good link about it.

With Client-Side routing, it is now the responsibility of the Client-Side-Code to handle the routing, fetching and displaying of the data in the browser instead of the server.

Babel is a compiler that makes all JS versions, even JSX, and emit a common one.

Webpack combines different JS files, pre-bundles them together into a single file, to make less http requests to the server.

React create during the first render the current tree,  that looks like the current DOM, and when updates cause a re-render it creates the workInProgress tree, representing how the DOM will look. React uses a diffing algorithm to check for differences and if necessary uses this second tree to update the current tree and the DOM .

Boocket is an app for book lovers that want to keep track of the books they want to read.    You can search for books in the Google Book database and add them to your personal wishlist. If you can find anything you like you can create a new book and add it to your personal list and delete it when wished. All books are persisted in the Boocket database, so you will have always your list with you!

I used the create-react-app generator to start my project and in specific npx, a npm package runner, a tool to execute node.js packages.

*I have change the name of the app after that.

My JS files, components and containers

index.js file will have my store with Redux that is connected with the rootReducer and thunk, in order to use async actions. index.js renders <Provider /> as the top level component and wrap my <App /> component.

App.js renders <NavBar />, <Footer /> and it is responsible for the React routes too using react-router-dom. I use react-router-dom, that is react-router plus some link improvements, <BrowserRouter> and <NavLink>.

<SearchableBookListContainer /> renders a form and takes care of its ‘query’ state. After the query, it renders a link list of books. This container is connected to the store to dispatch the action of searching and adding an item to the wishlist plus a list created after our search, the searchBookList. The list rendered with the results of the search has nested links to the book itself. Inside Link I  pass a pathname and a state with the book object and in my representational Book component I will get this info as props from Link react-router. I can access them as props.location.state.

<WishListContainer /> is connected to the store and gets the wishlist from here and renders it. It dispatch two actions, getMyWishList that fetches my API end point for a list of books and the deleteBook action. The list of books rendered follows same pattern as the one displayed in <SearchableBookListContainer />, and includes links to the book itself.
<CreateBook /> is a container connected to the store to dispatch the action of adding a new book and renders a form to create it.
<Book />, <Home />, <Footer /> and <NotFound /> components are representational components.
<NavBar /> takes care of all links importing from react-router-dom NavLink.

My source for the data is Google Books API. The Google Books API allows a maximum of 40 returned results and can sort only by search relevance and publish dates. I used the first functionality.

Redux is a predictable state container for JavaScript applications. It helps you write applications that behave consistently, run in different environments (client, server, and native), and are easy to test. —  https://redux.js.org/

I will use Redux to organize and have all my states in the same place and Thunk as a middleware to help me alter the behaviour of my actions, allowing me asynchronous requests. I will need to dispatch an action saying I am loading data, then to make a request to the API, and then to wait for the response and then dispatch another action with the response data.

With a plain basic Redux store, you can only do simple synchronous updates by dispatching an action. Middleware extend the store’s abilities, and let you write async logic that interacts with the store.  —  https://redux.js.org/

To install Redux and Thunk in my app I type into my console:

To have access to the store in any of our components we import the react-redux function connectinto the component where we want to have access.

If we want some state we can use:

If we want to dispatch an action and update our store we do something like:

Then to be able to debug I have installed redux-devtools-extension and add this code to my index.js:

Considering web accessibility in my app

I have followed some requirements to take into account web accessibility.

I wrapped up the project as a docker image in the Dockerfile. 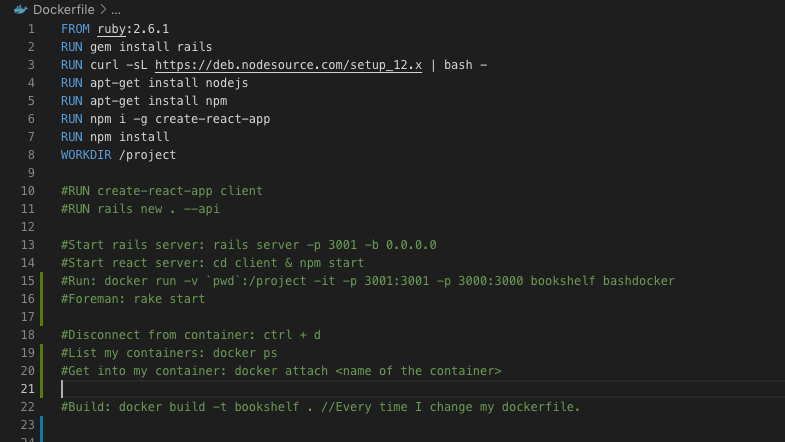 I follow these instructions and as soon as I have the basics working I do the following:

Create a model for my Book:

I create a seeds file and run my migration:

Create a serializer for book and draw my endpoint inside config/routes.rb

How do I connect my react app with my rails API? In my actions. I fetch the end point of my API “books” and GET and POST to it.

This is how my end point looks with my wishlist: 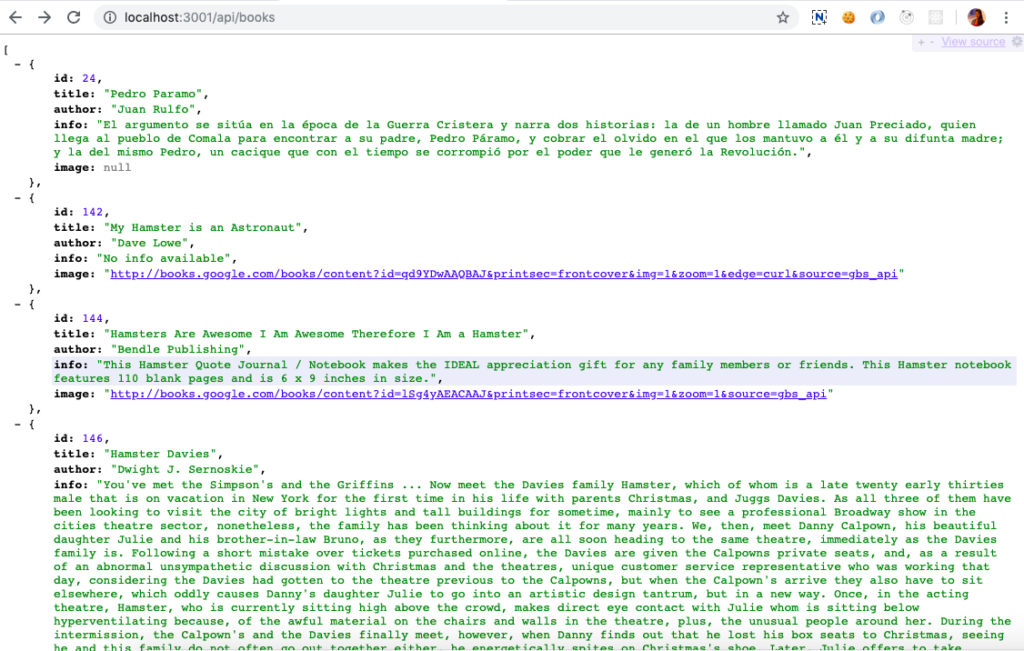 And I think that that’s it! I have enjoyed a lot this project despite it took my a  while to figure out Redux functionality. I went through a lot of different problems and learnt a lot. Ah, this bug was my favourite one . I manage to set undefined as my query so my search results were hilarious but very revealing too! 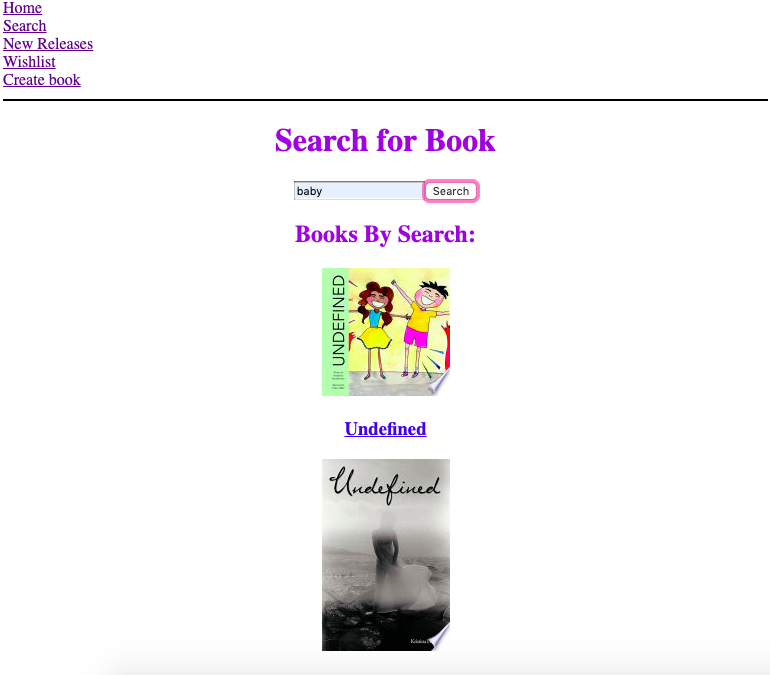